Respect Must Always Be Earned

The day will never come when you can walk into a room and command respect simply because of your title or position. Respect must always be earned.

Consider the President of the United States. Half the country disdains him. The other half thinks they could do some things better.

So what makes you think that getting a promotion - becoming a manager - also grants with it some sort of commanded respect? Now, those who report to you might provide you with some sort of reverent deference - but only because you possess firing privileges over them. We must not confuse that kind of quasi-fear with genuine respect.

Once someone's no longer a threat to be in charge of you - they instantly become a little harder to dislike. Consider the Republican quasi-admiration Bill Clinton has garnered post-Presidency. So, I started thinking about it last week - what a "CEO" President would have looked like.

I think the average person would have liked Romney as President.

Of course, not after beating "their guy". But in general. The guy's fairly middle of the road - in practice if not rhetoric. He's where a lot of people are. Perhaps only because he specifically caters to the masses. He governs, rather than legislates.

I think most people would have liked most of the decisions he would have made. Of course, I'm only saying that because I know it's no longer an option.
-
November 12, 2012
0 comments

Moneyball Works For Everything

This year, Nate Silver shocked the world by correctly predicting, to a remarkable degree, how each and every state would turn in the Presidential election - despite many Republican pollsters predicting a Republican edge... But I wasn't shocked...because Silver was 49/50 in 2008. This stuff works. Not just for baseball. Not just for politics. And it's not computers replacing people, either. But people USING computers, and in-depth and beautiful data analysis to make better decisions than ever before. Get on board folks. (My league's fantasy football rankings as of this morning - want to guess who I am?) 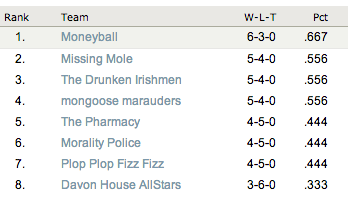 The Republic Will Stand…

FOR THE JOYOUS
Do not stop. Your desire to pursue the alleviation of the social injustices you see does not end at the voting booth. There are non-profits around the world doing amazing things. Join them. Help them. Do not wait until others are forced by legislative mandate to fund these next social programs you desire, but pick your priorities, and work toward them yourself, while persuading others to join your fight.

FOR THE DESPONDENT
Do not stop. A boring rich, white robot just about tied the coolest President we've ever had.
-
November 7, 2012
0 comments

Why Hurricane Sandy Doesn’t Really Matter and Why it Does

Presence in the Age of Trivialities
by Quinton Peeples

It came as no surprise that as Hurricane Sandy brought devastation to the Eastern Seaboard, the internet lit up with arguments, tweets and Facebook posts about the Disney/Lucasfilm merger. We are what we practice and we practice trivialization on a daily, almost hourly, basis. We have second screen experiences, scrolling headlines, live “timelines”, niche markets, microbrews and on and on and on. While I enjoy having choices, what has happened along the way is an unintentional and devastating reality: we are unable to stop choosing. We have lost our ability to sit, to simply be present with something painful and discern its relative value. While I am not criticizing a serious discussion of entertainment conglomerates merging, I am concerned that in the current context, it is better suited for a later date. We are limited, finite beings, with limited and finite energies and resources. Our ability to choose, and choose wisely what we think about and engage reveals who we are and what we value. Averting my gaze from people in need to discuss rich people getting richer, says an awful lot about me. Things I might not want to consider. And why should I? Someone just “liked” my post on Pinterest.

The Subjectivity of Horror
by Eric Olsen

Quinton argues that Hurricane Sandy is one of those moments that deserves our full attention. Perhaps because of its cataclysmic nature (and powerful imagery), its financial destruction (~$30 billion), its human devastation (current death toll: 110), and likely also, its placement in beloved New York City. It is unquestionably a tragedy of epic proportions. And yet, like Quinton mentioned, we are limited, finite beings. And we are surrounded by tragedy. There is so much horror in the world that if we choose to focus on it all, we run the risk of being swallowed up altogether - we could mourn with those who mourn until we question whether there is indeed goodness left in the world at all.

So, often without choosing, we prioritize what we allow our heart to hurt for. And Chicago's record homicides this summer (we're on track for 500 for the year) hit me harder than Sandy. Now, I can actually argue that Chicago's tragedy is "worse" objectively. Acts of man, not mother nature. Acts of hatred. Pride. Jealousy. Evil. But, it's probably just because I live here. New York is a somewhat fictional Woody Allen backdrop in my mind - despite having been there. Chicago is real to me. And there will be always be subjectivity in what we find important - what we feel connected to - what we cry for. If my daughter were diagnosed with diabetes, I would likely devote my life to finding a cure. Many in that situation do. The circumstance they find themselves in instantly changes their empathy.

I don't want to live in the trivial world Quinton described. I don't want to ignore the true acts of horror that really exist - to hide in the beauty of the world, of which there is also enough to rejoice in forever. Yet, I don't want to fall in the pit altogether, despite the seeming nobility of lying in the ashes.
-
November 6, 2012
0 comments

7 Debate Questions I Wish the Candidates Were Asked

Don't get me wrong. I think saying as little as possible as aggressively as possible is brilliant debate strategy. I really do. But here are 7 questions I'd love to hear honest answers for, just for the sake of our greater understanding. Feel free to add your own questions, or answer those you'd like in a way that empathizes with the "gray" nature of the questions themselves.

The Myth Behind the Chase vs. the Catch

The misconception of comparing the chase with the catch is the incorrect belief that the "catch" is a finality.

Because 50% of people end up saying, "You no longer have me."

Where Can I Find Your Music Online?

My friend asked me this question the other day. And I wasn't sure.

Then, I realized how crazy that was. How do I not know where my own music lives online?

Well, the reason is that I wanted to get paid for it. So, I paid $ to get my music listed on sites where I could make $ off it.

Shortly after, I discovered the $ it cost to get my music listed was > than the $ I made off the sales.

Therefore, my 'Why Every President Sucked' is only up in iTunes and Spotify for a little while longer. My Relevant Reverence stuff has all expired.

This is silliness. A simple database issue. I used other's databases in order to try and protect my music, and have ended up making it an impossibility for people to listen to that which I created for that specific purpose.
-
October 15, 2012
0 comments

More than just materialistic minimalism, there's a whole other life minimalism strategy focused on mental heath, based on the concept that your brain is a fatiguable muscle.

Every notice that Steve Jobs wore the same outfit every day? Every notice Mark Zuckerberg does the same? I recently got some possible insight into this fact through author Michael Lewis' recent interview of President Obama for Vanity Fair.

"I'm trying to pare down decisions. I don't want to make decisions about what I'm eating or wearing. Because I have too many other decisions to make." He mentioned research that shows the simple act of making decisions degrades one's ability to make further decisions. It's why shopping is so exhausting. "You need to focus your decision-making energy. You need to routinize yourself. You can't be going through the day distracted by trivia."

Think about it. The days when you get home from work with big plans to get something done, and you just can't? You collapse on the couch. And it's not always as if you've spent the day conducting heart surgery in the E.R. Your mind is simply tired from the junk of the day.

So what if we try to automate the unimportant decisions in our life, so we can focus our full attention on the things worthy of it?
-
October 5, 2012
0 comments

Minimalism Example #3:
Cut your wardrobe to 7 essential items, and wear only those for a month.

Jen Hatmaker's book called 7: An Experimental Mutiny Against Excess recounts a 7-month social experiment in her own life, in which for one month, she ate only 7 different foods. The next month, her wardrobe consisted of only 7 different items. You get the idea. Short-term (doable) attempts at rediscovering what's really necessary.

So, there's a big part of me that really likes the clothing minimalism concept - long-term.

Because I dress fairly "classic" as it is, and almost prefer the aesthetic of minimalism. (Think Uncle Jesse). But, there's two hold-ups here. One, I work in a creative field, and two, I work in an office setting. Would this repetitive nature of dress (making others think I'm homeless or simply have awful style) damage my career/reputation?

I also think this method has got to be a lot harder on girls than guys. You actually NEED 30 outfits, because your golden blouse is so memorable it'd be super awkward if you wore it 3 times a week. Then again, maybe you could just minimalize your color palette. Go the white/black/light method that I chose for my own fictitious wardrobe.

This one's interesting. Anyone see any other big downsides here?